You may be in love with Social Space, but have you wondered about how it is made? The Lien Centre for Social Innovation’s Summer Associates went on a field trip to find out. LING KAI TSI has the report.

Little about the industrial building that we're in suggests that you might find anything cool here. We are led down the end of a long, featureless hallway, to a door wedged between the head office of a power tool company and a party supplies store. “Come in,” a middle-aged man beckons enthusiastically, his eyes crinkling as he smiles. Casually dressed in a black tee-shirt, jeans and sneakers, he easily embodies the stereotypical idea of the trendy creative. This is Yeo Yeok Chuan, owner and Creative Director of Achates 360, Social Space magazine’s design agency (and our first stop for the day). “You can call me Chuan,” he says as he leads us in for the tour. Like Chuan himself, Achates 360’s office is everything the rest of the building isn’t: vibrant, eclectic, alive. Drawing our attention to a display shelf, Chuan is eager to show us some of the work he’s done for his clients over the years, from investor reports for major banks to disc art for video game, Hellgate: London. It’s clear that there’s room for fun here, especially when he shows us a small bottle of peanut butter labelled with a picture of his one-year-old son. “He looks like a peanut,” he explains with a grin. Yet, as Chuan shows us around the workspace, he reminds us about the long hours that come with creative work—something that quickly becomes evident as we catch glimpses of designers modelling 3D objects, making preliminary sketches and laying out text and images. There’s plenty to excite the team in Achates 360’s workspace!

Chuan hastens to make clear that we’re only seeing half of the work; he explains that the design process begins with understanding their clients’ needs and goals. “We have to really dive deep into the target audience and dig out who they are—what they’re wearing or holding, how they stand, what they do, what they like—before we can even begin,” he says. Chuan then launches into a slideshow detailing the process of designing , including content and gridlines, colour and typography, page weight and postage costs. He also shares how the cover of the Youth Empowerment issue of Social Space was developed through multiple iterations with the Social Space editorial team. While the agency has received many awards—most notably for Building Memories, an interactive art book on the intrinsic histories, as well as personal and collective memories of four public buildings in Singapore (Book of the Year at the 2017 Singapore Book Awards, the Gold at the 2016 New York Design Awards and a 2016 American Graphic Design Award)—the team isn’t resting on their laurels. ““You'll always have to do better than the last piece you've written,” Chuan says, “and you can't let the hundredth article you've written do the work. You’ve got to write another hundred and another after that.” After asking some questions and (shamelessly) taking a few pictures, we leave for lunch and hop onto the bus for our next adventure. All hyped and ready for the next destination!

Our next stop is in the far west of Singapore: Tuas, a relatively remote industrial area best known by locals for its garbage incinerators. Our bus takes slightly under an hour to reach Tuas and another ten minutes to find the sprawling, unmarked building that houses Social Space magazine’s printer, Mainland Press. We’re led through the loading area and upstairs to the offices by Lawrence Yip, the Sales Manager, who raises his voice to be heard above the steady thrumming of bulky machinery. 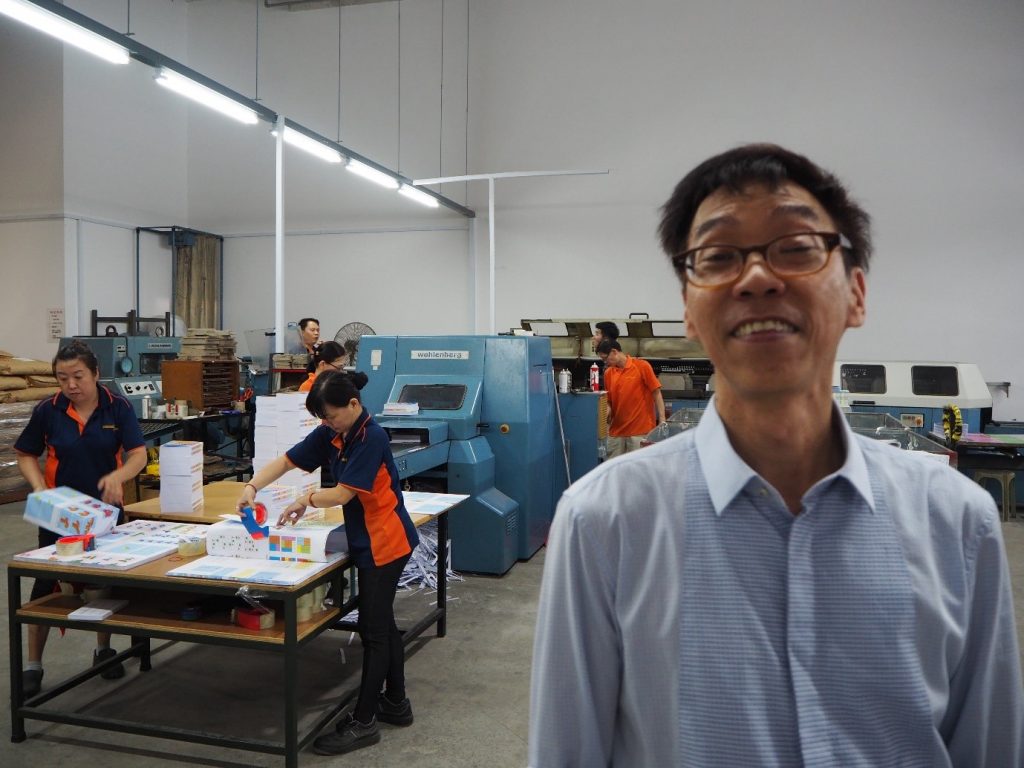 The shelves in Mainland Press’ meeting room are crammed with almost every kind of book imaginable: academic volumes, textbooks, assessment books, dictionaries in several languages and more—but it’s Social Space that Lawrence is most excited to talk about today. “We had to think about how we can optimise all the materials to make this magazine as readable as possible,” he explains animatedly, going into technical details with the ease of someone who’s spent more years making books than some of us have spent reading them. He reveals that the entire printing, treating, binding and packing process involves eight to ten people at any one time, working 24-hour shifts over five days. We learn about the differences between glossy and matte pages, printing methods and ways to bind books—all of which factor into a publication’s durability, appearance and cost. But Lawrence isn’t content to simply tell us about how Social Space is printed, so he takes us out of the meeting room and onto the production floor. Leading us from one workstation to the next, he walks us, literally, through the printing process, showing us the machinery and introducing us to the people involved at every stage of production. As he shows us around, the smell of toner and rhythmic hum of printing hang thick in the air. Nothing is left to chance here. When we ask about the small rags and bottles of cleaning solutions stowed neatly beside each of the printers, Lawrence explains that “… even a small speck of dust can ruin the printing process,” and admits his colleagues judiciously clean the workspaces at every available opportunity. After looking at how the pages are printed, we make a quick stop to the binding facility, where covers are affixed to pages on conveyor belts. It is here that our excursion officially ends. After taking some pictures with Lawrence—and his machines(!)—we clamber onto the bus and fall asleep as we make our way through rush-hour traffic, all the way back to our city centre office. The LCSI team is all smiles after a long and exciting day.

The next time you pick up a copy of Social Space, think about how much work it takes—beyond the rich content and glossy covers—to bring you the latest news in social innovation! Ling Kai Tsi was a Summer Associate (Social Media) at the Lien Centre for Social Innovation.