"The times are a changin'"—Bob Dylan

It's not always easy to give career advice to young people. In my time, there were virtual paths laid out for youths. Most of them started similarly. Go to school. Work hard. Get good grades. Squeeze in admirable activities. Decide what you want to be for the rest of your life. (The last bit was tricky.) Based on these, people chose a fork in the road that they believed would suit them and then made the best of it, earned a degree and then set off to start their careers. Not everyone had the chance to head down these paths, and many fell off them along the way, but those who managed to stay on them tended to live comfortable lives—at minimum.

These days, however, it feels like that reality is disappearing in the rear-view. Change in the systems that govern our lives is constant, but lately it seems that social pressures nudging those systems are coming at us harder and faster than usual, and the view on the horizon looks cloudier as well. Meanwhile, technological change seems poised to deliver shocks to the same systems. These duelling social and technological forces have us in a potentially precarious position.

Human work has long been replaced by technology. But from a big picture perspective, it tends to happen in fits and starts. Rather similar to the idea of punctuated equilibrium from biology—in which long periods of relatively slow change are disrupted by “explosions of diversification”¹—the economy tends to follow a similar pattern: lengthy bouts of relative stability are broken up by short, frenzied ones wherein the rapid proliferation of new tech upends the labour market. Academics have studied three such industrial revolutions, and many think we are on the leading edge of the fourth.

The First Industrial Revolution occurred when human and animal labour began to be substituted by mechanisation in the late 18th and early 19th centuries. Machines like the weaving looms that were attacked by the Luddites took over specific tasks.² Those machines were relatively inefficient, but they harnessed resources like coal and hydropower, which increased production and drove industrial expansion. Assembly lines powered the Second Industrial Revolution through the late 19th and early 20th centuries as mass production increased manufacturing output. Machines became integral to the work that was performed. This coincided with the proliferation of mass transport like trains and steamships which broadened the reach of industry. The Third Industrial Revolution arose towards the end of the 20th century, as mass production gave way to automation and hardware wedded with software in ways that were increasingly devoid of human intervention. Transport containers and the related infrastructure greatly simplified long-distance shipping while shortening transport times and greatly reducing costs. Factories tended to close where wages were high, while opening where they were low as economic development chased those new factories and stagnation set in on places where production had left. The Fourth Industrial Revolution may now be emerging. If really the case, we are on the leading edge, so attempts to define it are probably presumptuous. That said, so far it appears to be led by a new wave of robotics flexible enough to engage in a wide range of activities. (Some have even learned to cook by watching YouTube videos.)³ This may signal a significant shift for manufacturing, from an environment in which “people work near large, dangerous automated machines to one in which they work alongside—or even with—machines”.4 One recent study found robots were creating negative effects on employment and wages in the US as early as 1990.5Artificial Intelligence may also be on the cusp of transforming many things; what and how remain to be seen.6

Predictions about the impacts of the Fourth Industrial Revolution run the gamut from utopian futures in which all needs are provided by machines, to dystopian ones in which mass layoffs leave many struggling to survive. (Where any of us see things on that spectrum probably says more about beliefs and values than any semblance of facts and reason.) Regardless of the level of optimism, the one constant in these views is the great likelihood of significant change. A study published in 2013 found 47 per cent of all jobs in the US to be in danger of being replaced by technology.7 A follow-on study used the same methodology and found several countries with far greater portions of their workforces at risk.8

Rather than focusing on today’s needs, we should think more about what we might need tomorrow. What will the purpose be and how will education be delivered? Who will it aim to serve and what sorts of outcomes will it seek?

If we are indeed on the path to such change, our schools need to be prepared to react. Things like rethinking educational systems are usually taken on in response to the recognition that what is being done is no longer fit for purpose. While that may be the case in some circumstances, I am not arguing that schools are currently failing us, but rather that they may be in danger of quickly becoming ill-suited to deliver on society’s needs, and that we need to be prepared to adapt. But this time around, rather than focusing on today’s needs, we should think more about what we might need tomorrow. What will the purpose be and how will education be delivered? Who will it aim to serve and what sorts of outcomes will it seek?

It may be natural to want to design the “right” educational system and then set it in plaster; however, the ideas of complexity and emergence suggest a different need. Instead, should we aim to design evolutionary systems that will adapt with the changing circumstances of the systems they are embedded in? If not, would we not merely be trying to create something that will likely be short-lived? One question we ought to ask is: If we truly desire to create something adaptive in nature, how might we go about doing that? Further, what mechanisms could we put in place to ensure that we are keeping up with the needs of students and society in general? Who should be responsible for monitoring changing needs and how much effort should be attributed to keeping offerings current?

It may be natural to want to design the “right” educational system and then set it in plaster; however, the ideas of complexity and emergence suggest a different need. Instead, should we aim to design evolutionary systems that will adapt with the changing circumstances of the systems they’re embedded in?

There is a need to rethink formats as well. Degree programmes seem likely to be with us for a long time as they serve an important purpose, but should they be the primary focus of our higher education institutions? Many schools offer classes and workshops aimed at larger audiences, but they are often afterthoughts. How can we leverage the knowledge and expertise embodied in our schools in ways that benefit our communities more broadly? Setting aside the makeup of our educational systems, one should also consider the sorts of academic work required, going forward. How will we monitor the effects of robotics and artificial intelligence on employment and society in general, and what can we recommend to ameliorate negative impacts? Also, what positive “risks” might be available and how can we foster their existence?

If we truly desire to create something adaptive in nature, how might we go about doing that? What mechanisms could we put in place to ensure that we are keeping up with the needs of students and society in general? Who should be responsible for monitoring changing needs and how much effort should be attributed to keeping offerings current? 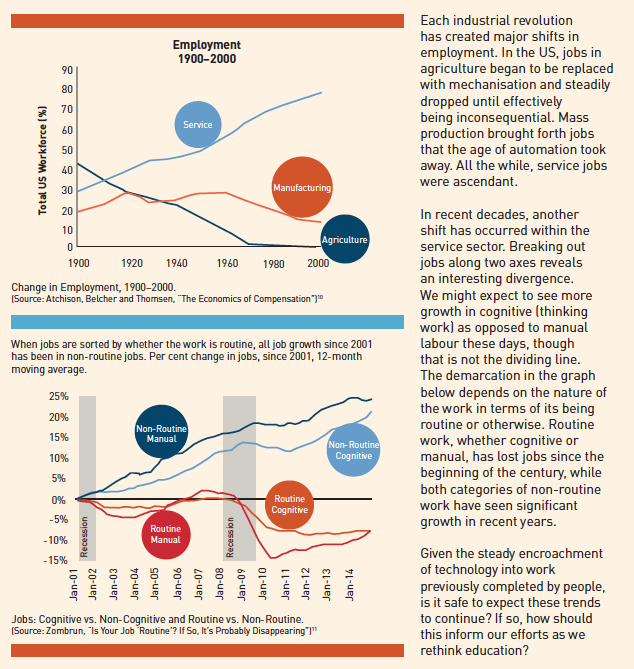 The list of things to reconsider is long and varied. The opportunities are great, though the risks of inaction or misplaced efforts are also great. It is, however, time to take a step back and begin a mindful review of our efforts and intentions, so that we might begin to reframe academia to fit future needs. I do not expect it would be easy, but nothing that matters ever is.

Going back to where this article started, perhaps the problem with giving advice these days is in trying to do so on yesterday’s terms. Freeing ourselves from this constraint opens possibilities. For my part, I would eschew any discussion of potential careers and instead focus on encouraging people to become lifelong learners— balancing the pursuit of knowledge in areas of interest with spending time learning useful skills. I would also suggest that we all set a personal expectation to occasionally reinvent ourselves. With that as the foundation of one’s outlook, tomorrow’s challenges might appear more like opportunities.

What is the purpose of education and how is it evolving? Who should have access to it and how should it be made available? Why do we deliver education in its current formats? Are any becoming outdated? These are all questions to consider.

2 Richard Conniff, “What the Luddites Really Fought Against”, Smithsonian Magazine, March 2011, at http://www.smithsonianmag.com/history/what-the-luddites-really-foughtagainst- 264412

7 Department of Engineering Science, “New Study Shows Nearly Half of US Jobs At Risk of Computerization”, University of Oxford, September 2013, at http://www.eng.ox.ac.uk/about/news/new-study-shows-nearly-half-of-us-jobs-at-risk-of-computerisation; Carl Benedikt Frey and Michael A. Osborne, “The Future of Employment: How Susceptible are Jobs to Computerisation?”, Oxford Martin School, 17 September 2013, at http://www.oxfordmartin.ox.ac.uk/downloads/academic/The_Future_of_Employment.pdf

8 Carl Benedikt Frey, Michael A. Osborne and Craig Holmes, “Technology at Work v2.0: The Future is Not What it Used to Be”, Oxford Martin School, January 2016, at http://www.oxfordmartin.ox.ac.uk/downloads/reports/Citi_GPS_Technology_Work_2.pdf

Chris Oestereich is an author, zero-waste consultant, and Director of Publications at Thammasat University’s School of Global Studies in Bangkok, Thailand. He formerly ran zero-waste programmes in the US grocery industry that helped firms reduce costs while improving environmental performance. Chris has an MBA from Washington University in St Louis, and a Masters in Environmental Management from Harvard University. He can be reached at chris@sgs.tu.ac.th