If you’re a Singaporean in your forties or older, it’s likely that your childhood home has already been demolished to make way for newer developments. Singapore has one of the world’s most rapidly changing urban landscapes, so it is impossible to conserve every single building. However, we can document these structures and spaces before the wrecking ball hits. That is what I aim to do through architectural photography. There are many photographers in the world but not everyone sees the world through the same lens. To capture an impactful image, we don’t necessarily have to use a fancy camera—sometimes, the best machine is the one we have at the moment. Often, that is our smartphone. To illustrate my point, here are some images I took with my  iPhone XS Max, using either the wide-angle or the telephoto lenses native to the iPhone. No special attachments were used. 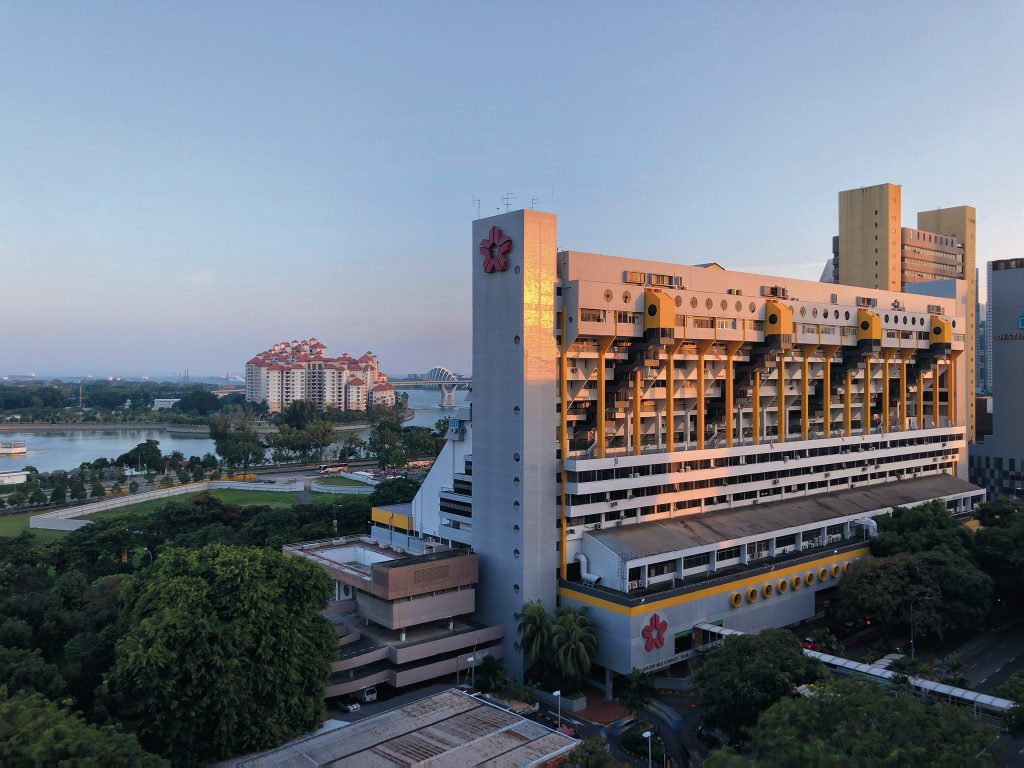 Golden Mile Complex was in the news a lot recently due to an ongoing debate as to whether the building should be demolished or conserved. Opinions are divided and sentiments swing from it being a “vertical slum” to an architectural marvel of the 1970s. 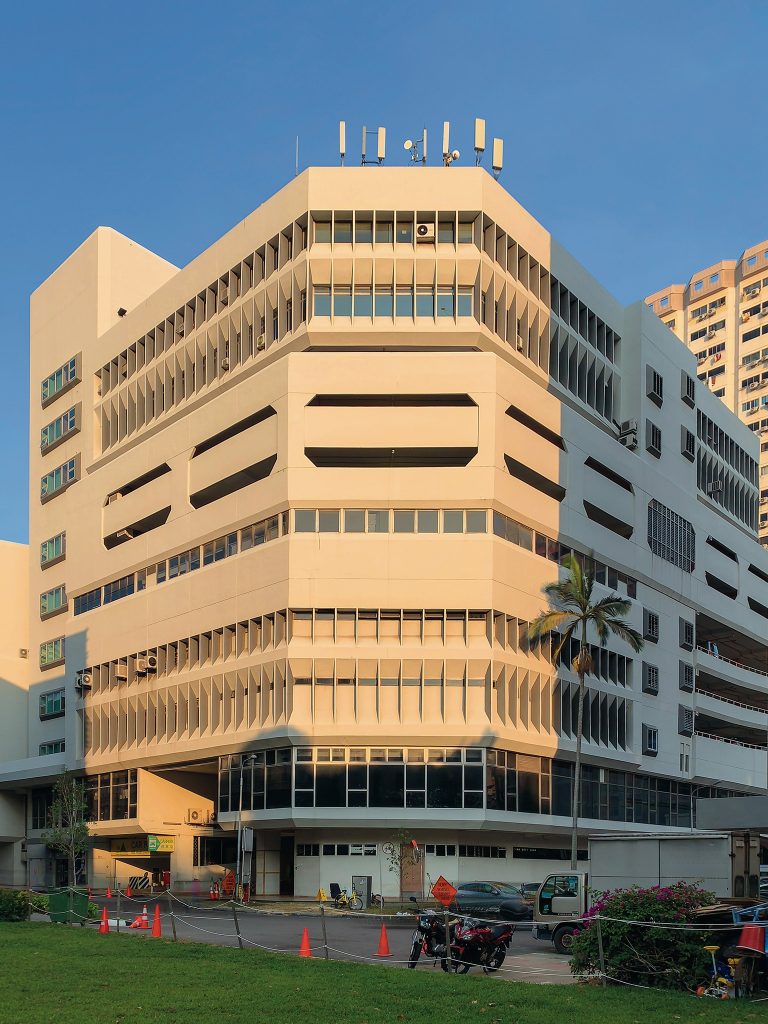 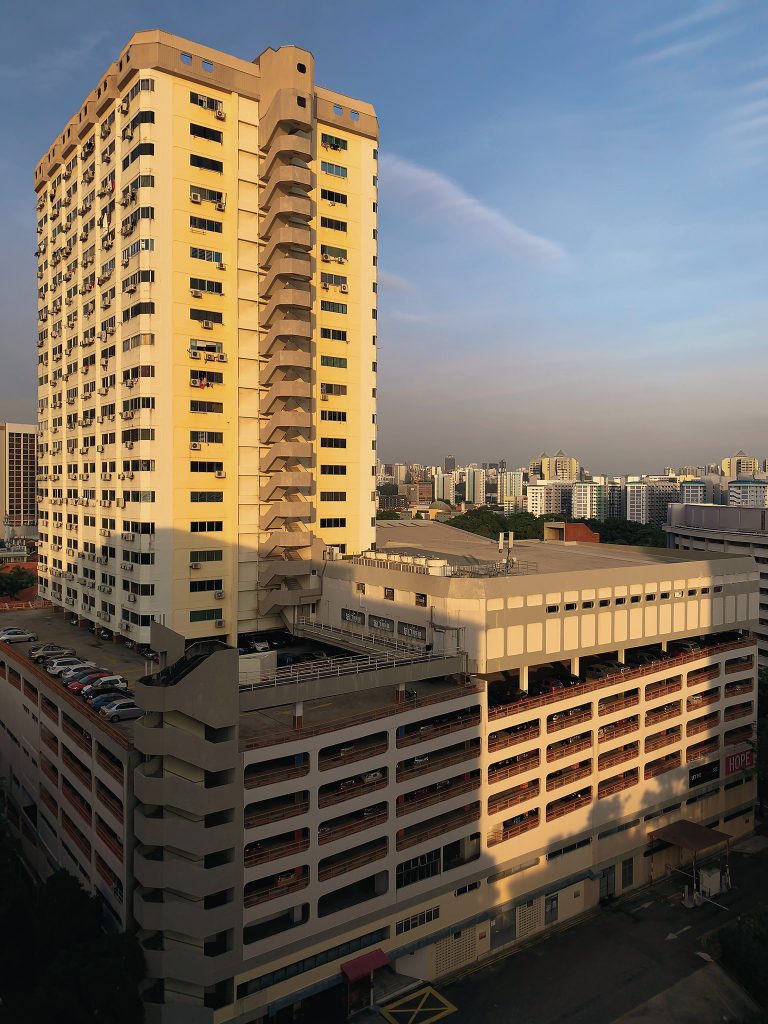 Sultan Plaza and the Textile Centre are buildings that stand next to each other along Jalan Sultan. They were both designed by Singaporean architect Chee Soon Wah, the same architect for the now demolished Queenstown Cinema. The two buildings have been put on the market in collective sales exercises, which means they will most likely be demolished once sold. 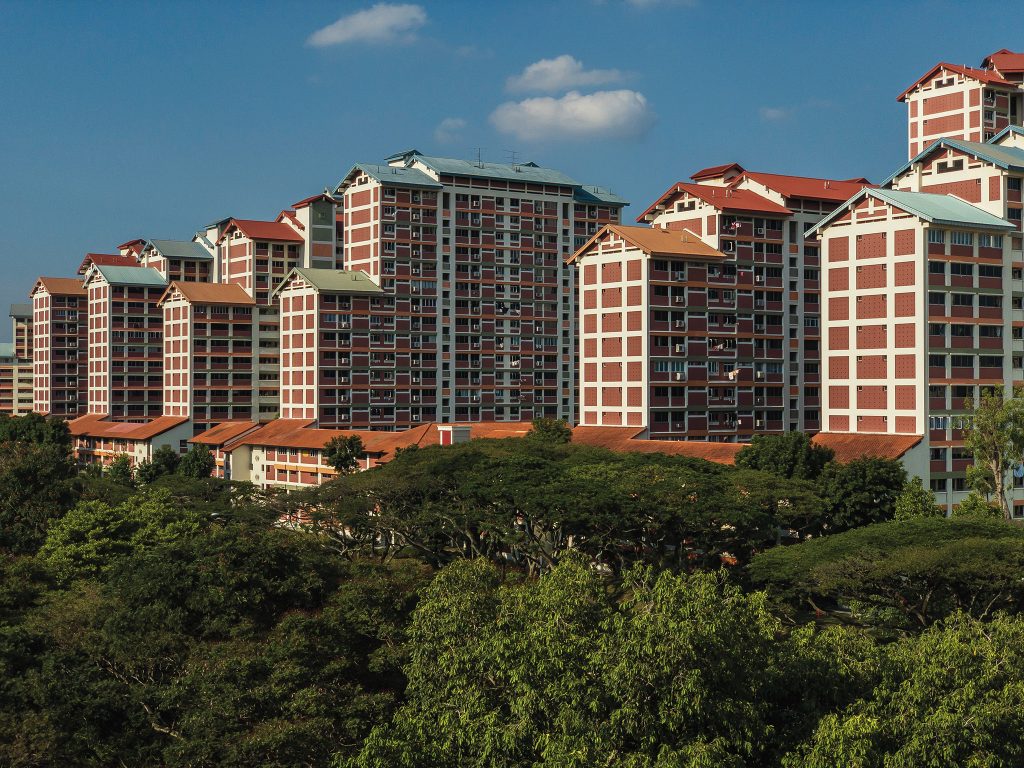 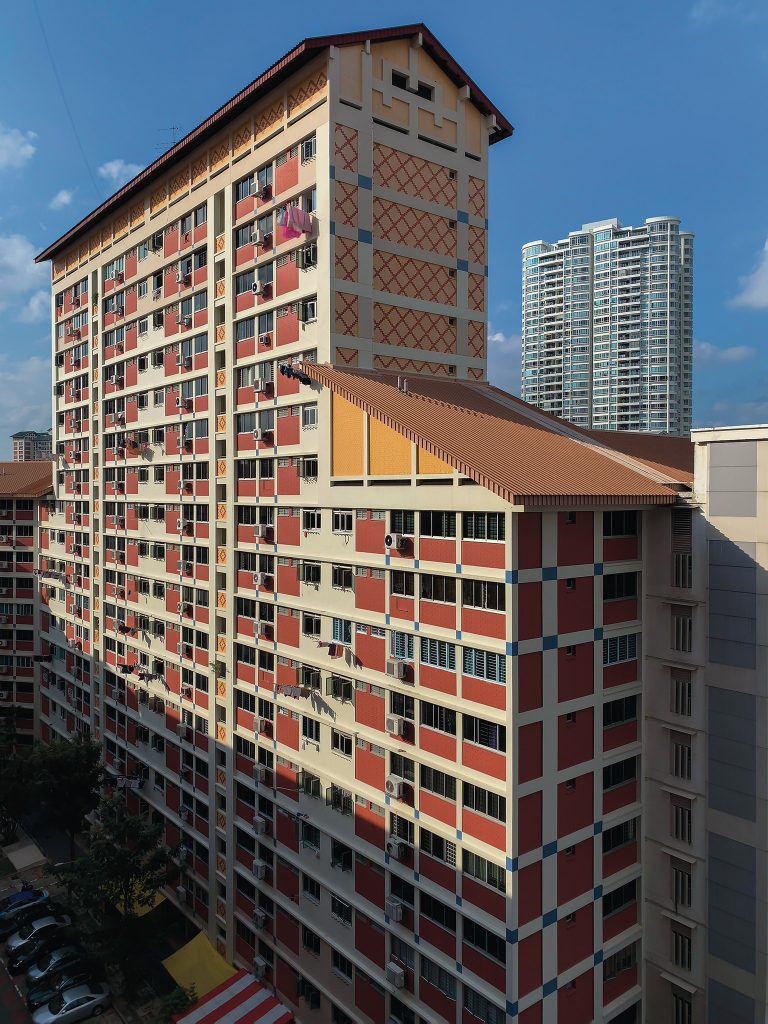 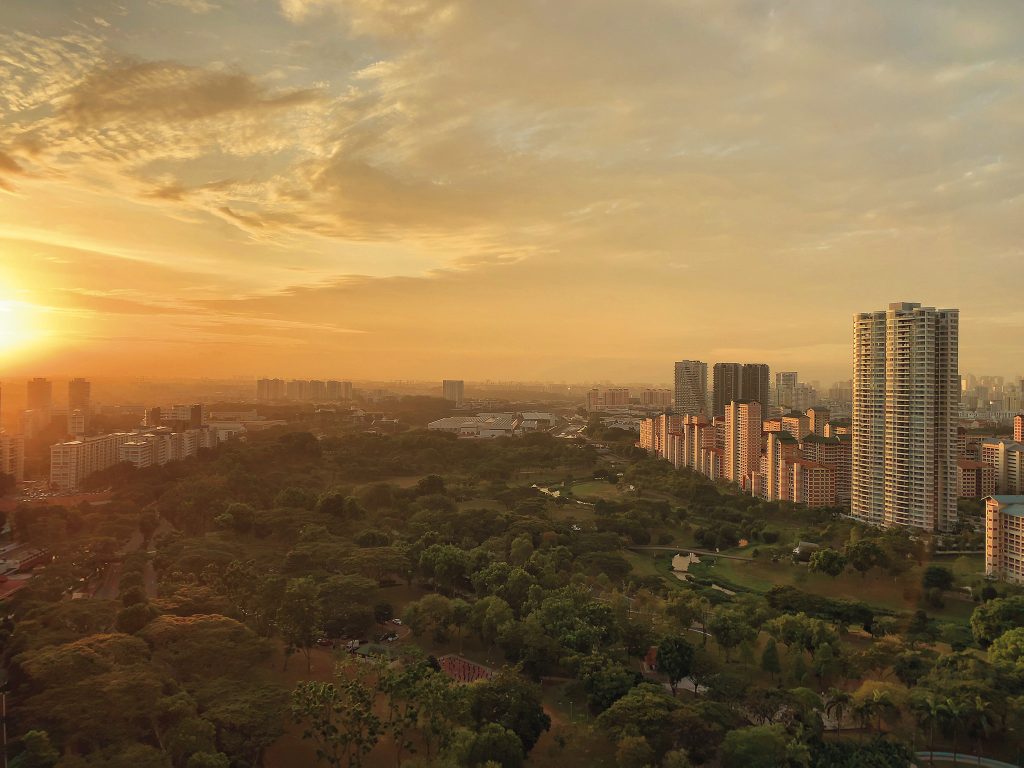 Bishan New Town was one of the Housing and Development Board's (HDB) second-generation new towns, first conceived in 1979 when the government acquired land originally occupied by the largest Chinese cemetery in Singapore, the Kwong Wai Siew Peck San Teng. Presently a cultural organisation and columbarium, it was a cemetery that dated back to 1870 and was initially designated for the Cantonese and Hakka communities, but later for all Chinese. In the 1980s, the HDB began to develop this land and also resettled the residents from Kampong San Teng and Soon Hock Village, two major villages in the area. The distinctive red-bricked,  gable-roofed residential blocks people have come to associate with Bishan is actually Bishan North, one of the four parts of Bishan. 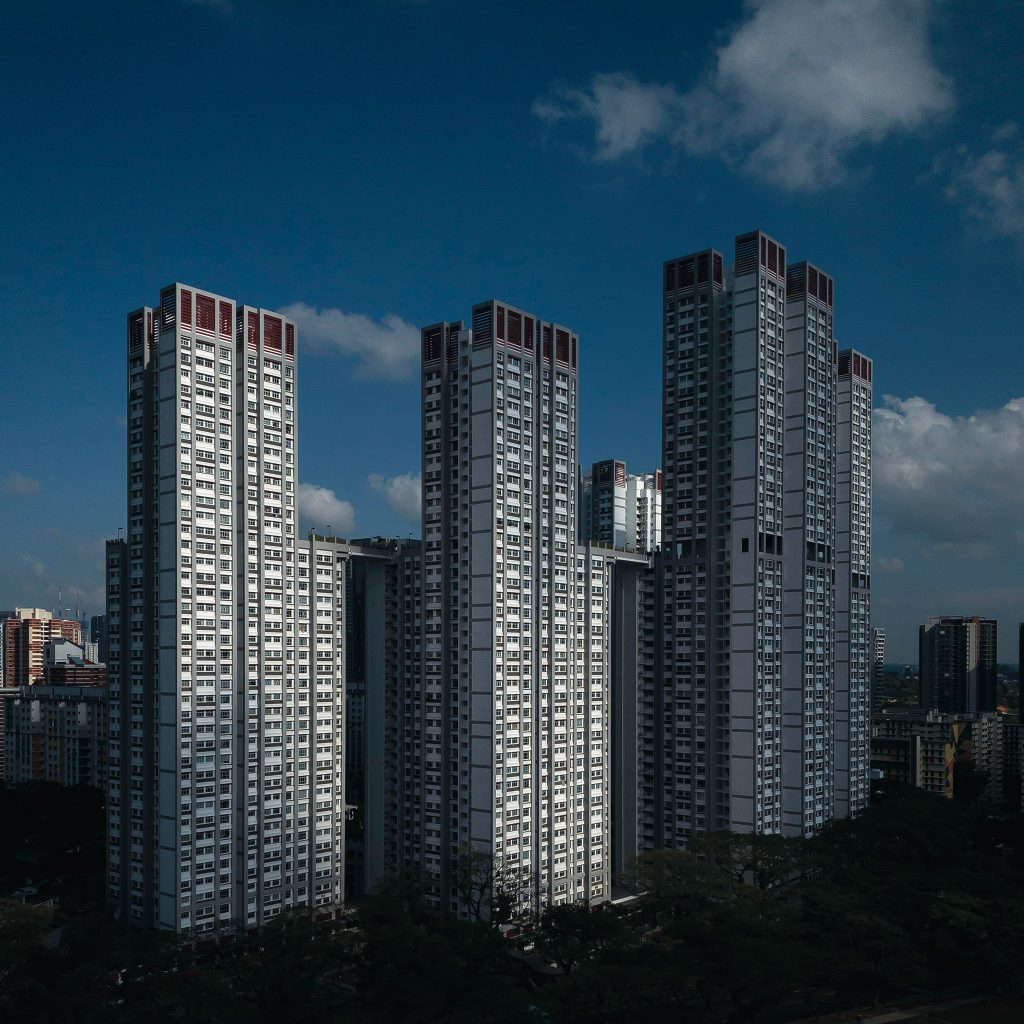 City Vue @ Henderson is a new HDB estate, completed in 2018. Featuring five towers, two of which go up to 48 storeys in height, they are the second-tallest public housing blocks ever to be built in Singapore, shorter by just two storeys than Pinnacle @ Duxton, which boasts 50-storey-tall flats. 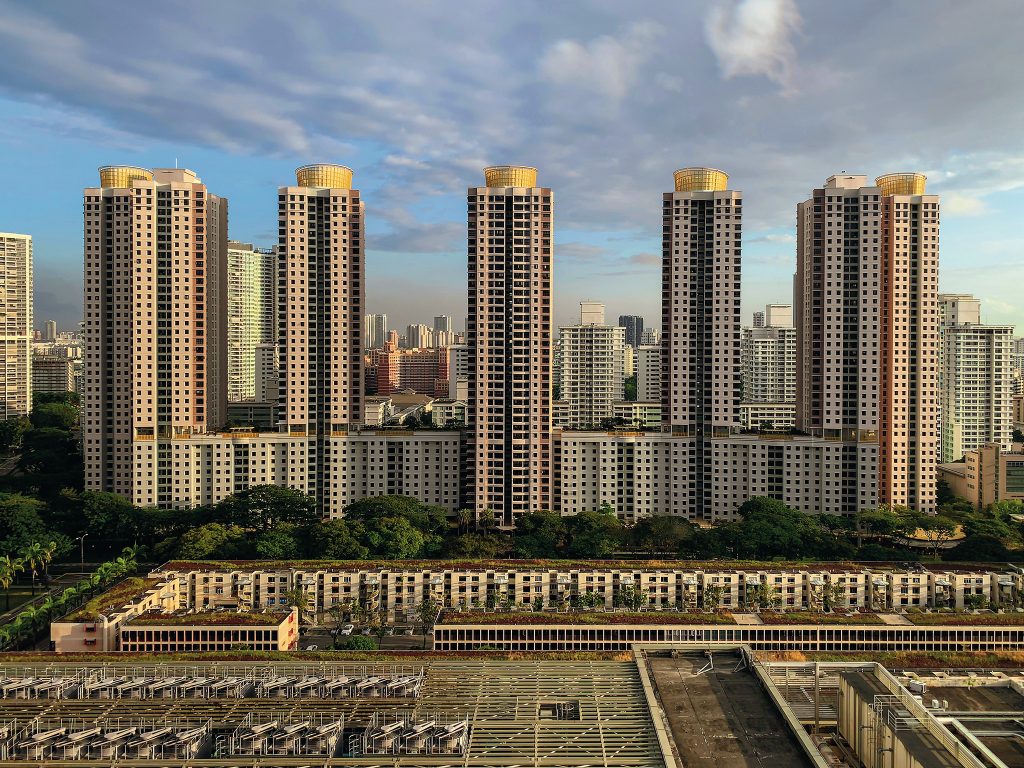 In Toa Payoh Central, there once stood Block 79 which, at 300 metres in length, was one of the longest, relatively straight, HDB slab blocks ever built. Ten storeys in height and housing a total of about 400 units, Block 79 was redeveloped in the early 2000s and eventually demolished in 2003. In its place rose Blocks 79A to 79E, five towers of 40-storey blocks. Completed in 2009, these were one of the tallest HDB blocks ever built in Toa Payoh. Blocks 79A to 79E consist of nearly 1,200 units, a threefold increase from the previous Block 79 in terms of density. 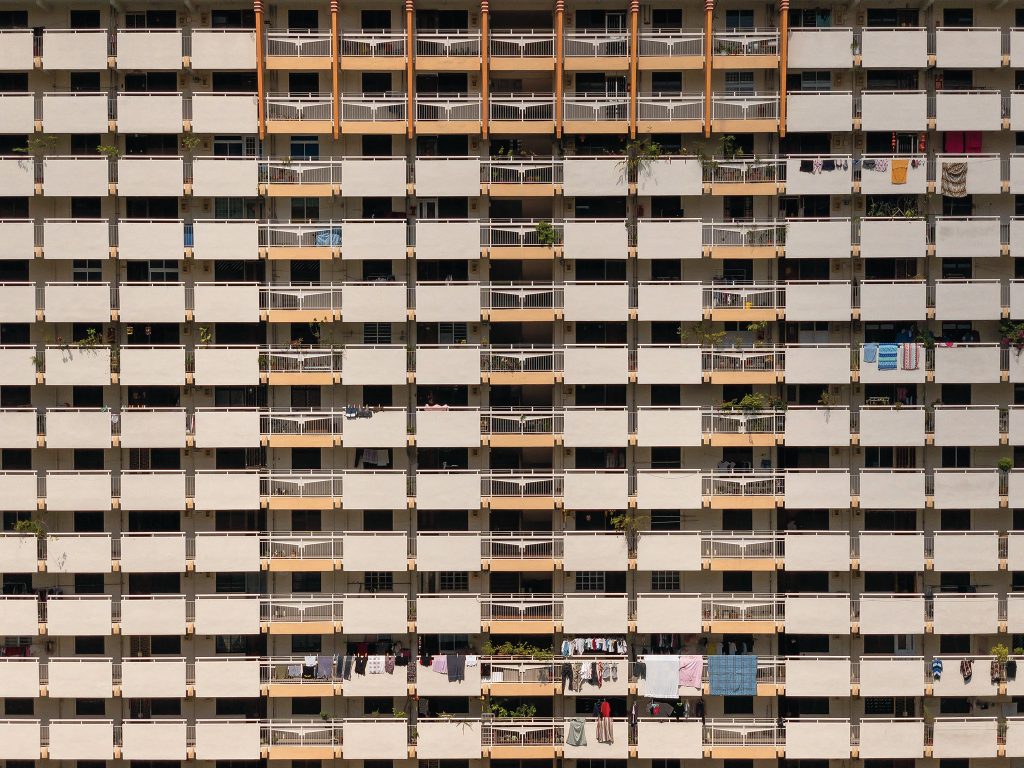 Completed in 1970, Block 128 Toa Payoh Lorong 1 is considered one of the “later” HDB blocks to be built in Toa Payoh. It was part of the first building phase of the new town, much of which was originally completed by 1966. Block 128’s claim to fame is being home to Creamier Handcrafted Ice Cream and Coffee, a hipster ice-cream shop. Sadly, the Toa Payoh outlet of Creamier will be closing in July 2019.

Block 34 Whampoa West (to the left of this panorama) has the longest continuous common corridor of any HDB block in Singapore. The corridor’s length spans 320 metres: that’s six laps of an Olympic-sized pool with leftover distance to spare, or about three-quarters’ the perimeter of a standard 400-metre running track. It was completed in 1971 as part of the Kallang Basin HDB development after the HDB drained all the swamps in the area, and counts among the oldest HDB flats in that precinct. Block 34 Whampoa West is 12 storeys tall with 46 units per floor. 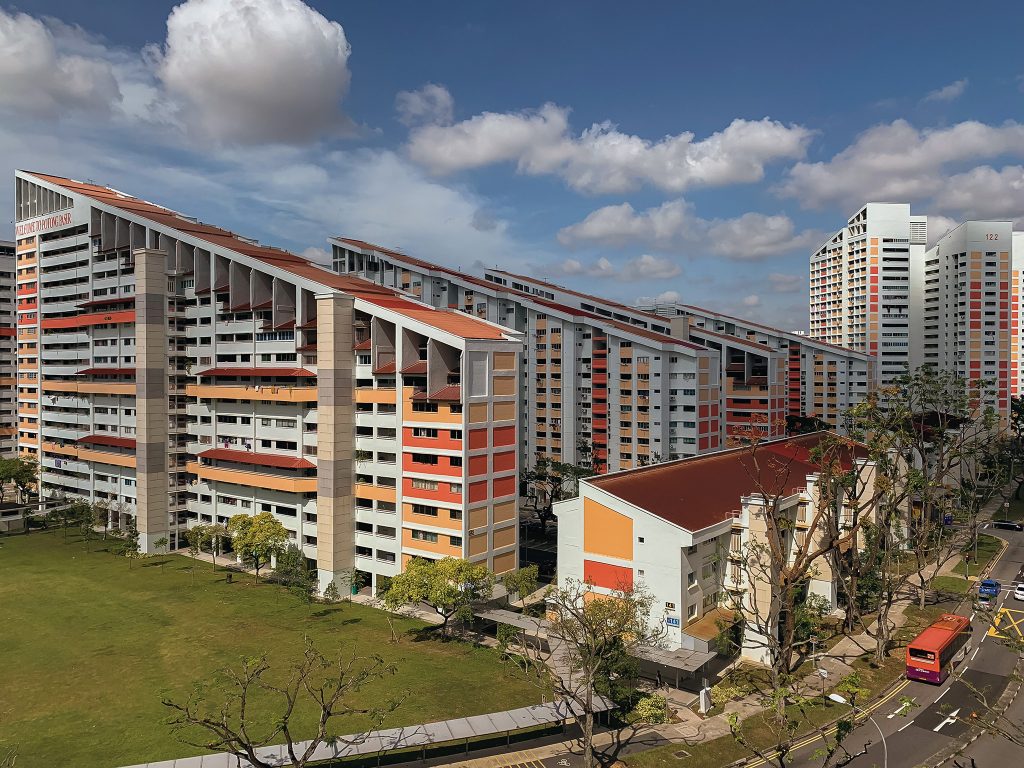 When they were completed in 1984, the ski-sloped slab block and point block designs heralded a break in typology for HDB architectural design. The HDB had already been experimenting with multiple block designs but they were mostly centred around the typical typology of either a slab or a point block. It was only with Potong Pasir that this new design came to fruition. The HDB was so proud of its ski-sloped roofs for Potong Pasir that they featured them on the cover of their 1983/84 Annual Report. 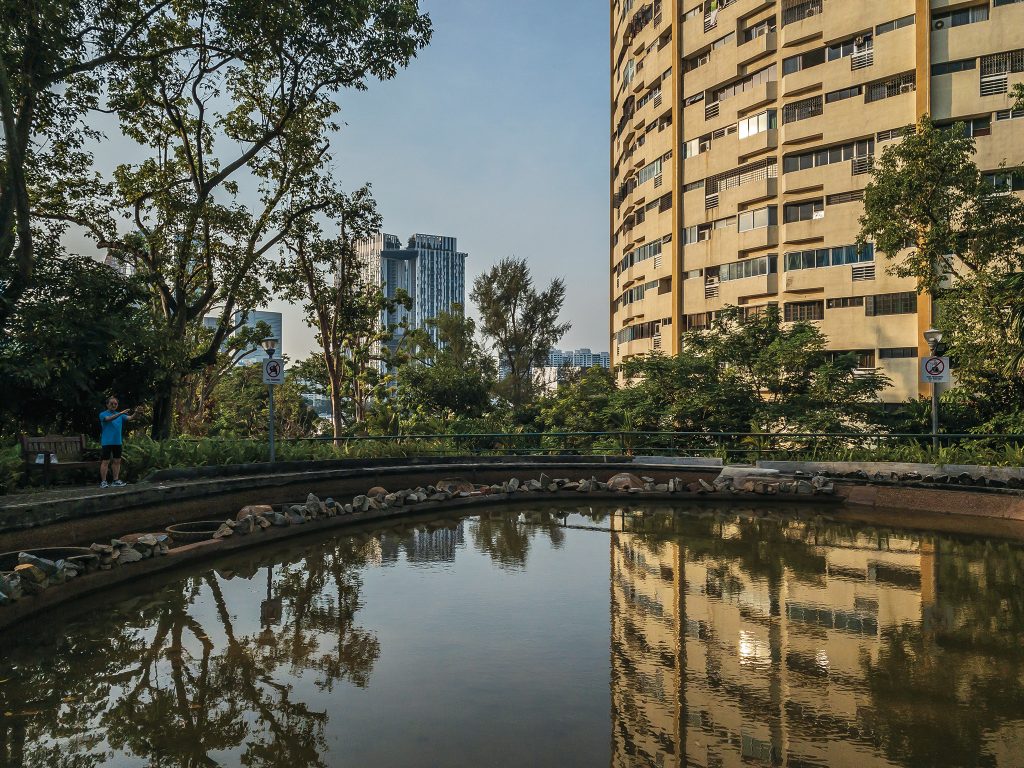 Completed in 1976, the Pearl Bank Apartments building is an icon on Pearl’s Hill. Designed by local architects Tan Cheng Siong and Tang Guan Bee, it fell into disrepair barely 20 years into its life, and has since been on a downward spiral in terms of breakdowns and poor maintenance. Despite being an amazingly unique and special architectural form, the owners of Pearl Bank Apartments decided in 2018 to collectively sell the complex. The developers who bought it have unfortunately decided it was not feasible to conserve the building and as such, it will soon be demolished to make way for a new condominium to be built on the site. 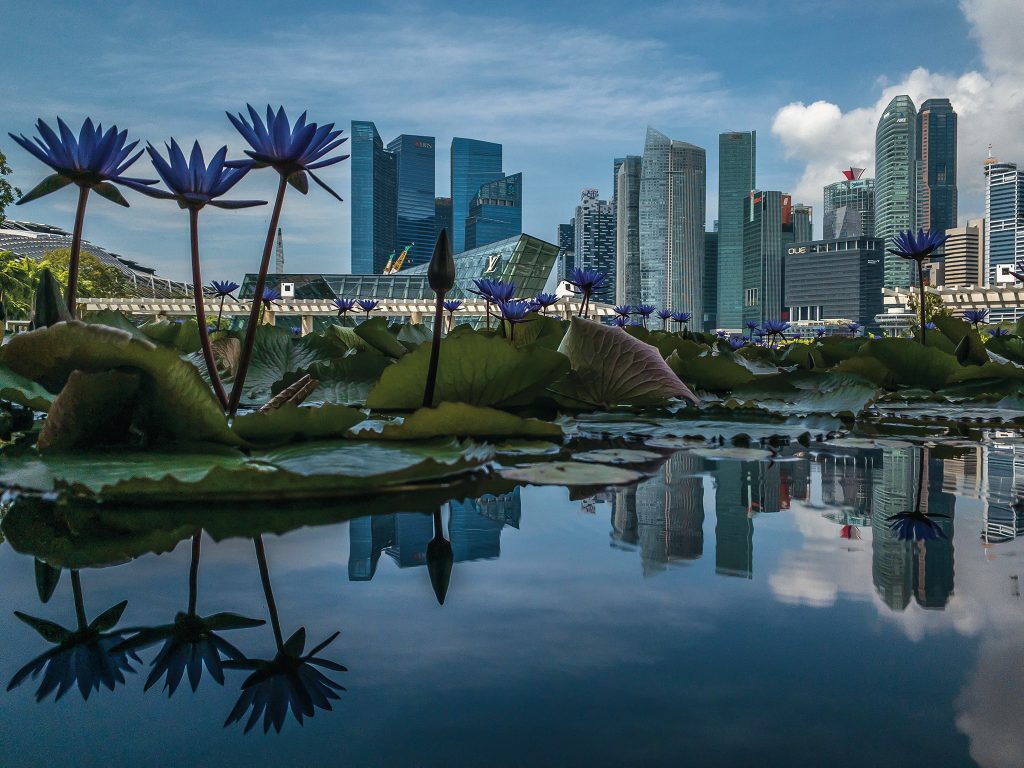 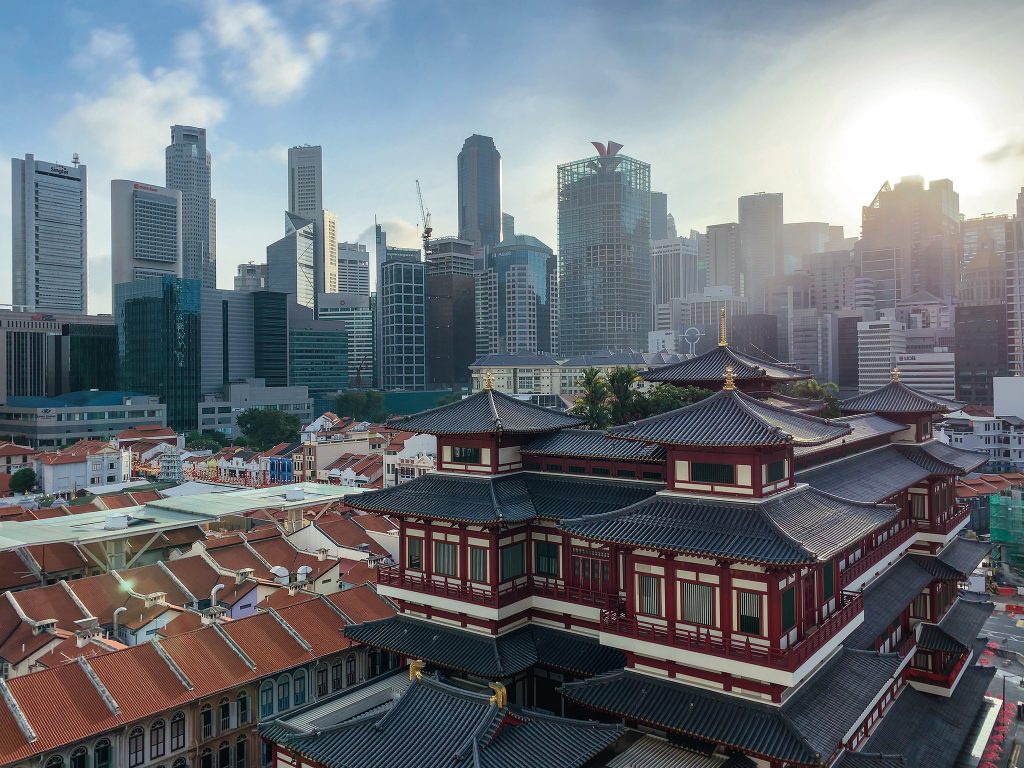 Singapore is most famous for its skyline as seen from Marina Bay, so how does one try to make a different view of it? Pairing it with some lotus blooms and a pond is one way (top); another is trekking to the other side of the skyline in Chinatown and photographing the sun coming up through the skyscrapers (bottom).

The following advice on photographing buildings and spaces applies to all equipment, whether you’re shooting with a smartphone or a larger camera.

All images courtesy of Darren Soh