Meet Neil Chua, 36, founder of RuanAtWorkz Musical Arts (R.A.W.), a non-profit group dedicated to culturally preserving traditional art forms and showcasing the charms of ancient musical instruments such as the ruan (阮) to modern and mainstream audiences. A plucked string instrument dating back to ancient China and played within its royal courts, the ruan almost went extinct (twice) when it disappeared at various points during its 2,000-year-long history. That won’t happen again—at least not on Neil’s watch. Determined to ensure not only its survival but also its flourishing, he and his team at R.A.W. are keeping the ruan and other traditional art forms alive through performances, workshops, conferences and community events. ISHAN SINGH chats with Neil about the beauty and importance of cultural diversity.

Please tell us more about you: what were you doing previously and what led you to start R.A.W.?

Besides being founder and artistic director of R.A.W., I am also a freelance musician, composer and educator. I started RuanAtWorkz Musical Arts because I believed I had a greater role to play as a musician—one that went beyond performing or composing. I wanted to contribute to society by using music to bridge communities.

How did you first come to discover your love for traditional instrumental music?

During my high school days, when attending a curriculum fair, I saw a  “weird-looking” instrument and was attracted to it. This was the ruan. Upon strumming a few random notes, I was immediately mesmerised by the mellow, sweet-sounding tune that it produced—it resembles a human voice—and loved that it can be played like a guitar. After my first encounter with the ruan, I began to do more research. I found out that it was a very uncommon instrument because it was only available to Chinese royalty and high court officials. Moreover, unlike more well-known instruments like the pipa or erhu that do not in fact originate from China, the ruan actually does. My interest in the ruan led me to embark on a seven-year stint at the Shanghai Conservatory of Music. After graduating with a Master’s Degree in Arts, specialising in the ruan, I made it my personal mission to promote the ruan and other forms of traditional cultural arts.

Traditional music has quite niche appeal, and the ruan is not exactly a well-known instrument in Singapore. How do you hope to win more fans and help them appreciate it on a deeper level? In all things, it helps to know the history and backstory. After disappearing twice from Chinese cultural history, the ruan almost went entirely extinct—that is, until it was “resurrected” in the 1900s. Scholars at the time replicated the instrument based on the very limited knowledge they had and could find, resulting in the iteration of the ruan in use today. 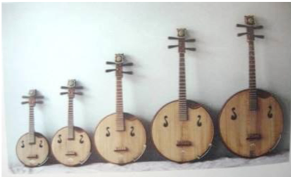 The ruan’s history is also said to resemble the ancient Chinese Time Concept (五更, five stages of the night), and fans of the instrument often appreciate the music on a deeply personal level. Listening to the ruan, one may think of the human experience in terms of the highs and the lows in life, and various emotions attached to each stage of the night. The ruan is also extremely unique—it’s the only Chinese traditional plucking instrument to come in a family of five. I play the zhong ruan (middle ruan, best for tenor parts), but there’s also the gaoyin ruan (高音阮, soprano), xiao ruan (小阮, alto), da ruan (大阮, bass) and diyin ruan (低音阮, contrabass).

Singapore being a multicultural society, don’t we already have enough cultural diversity?

Not cross-culturally. It’s common for members of the same ethnic group to watch their own performances, but much rarer to see Chinese audiences for an Indian dance, or Malay folks attending a Chinese opera, for instance. What we need is for more Singaporeans to open themselves to cultural art forms that are outside what’s familiar and known to them. One of our 2017 productions included Sesaji Segoro—The Daughter of the Ocean . Held at the Malay Heritage Centre, it was attended by many members of the Malay community. During the post-show interactions, many of them came up to us, sharing that they didn’t know the “Chinese Guitar” (the ruan, we corrected them) sounded so beautiful and that they’d never seen an Indian traditional dance before. It was through our performance that they were introduced to these new, enjoyable experiences. My team and I felt very encouraged and validated by their feedback.

Integrating cultural elements sounds easier said than done. How do you bring out creativity while maintaining authenticity?

Even though I specialise in the integration of various cultural elements into my work, I always insist that my collaborators interpret my artistic direction based on their respective traditional practices. Every culture/tradition has its own methodology and system that’s been handed down for centuries; the challenge therefore is to ensure that while we integrate, we do not lose those roots and values. 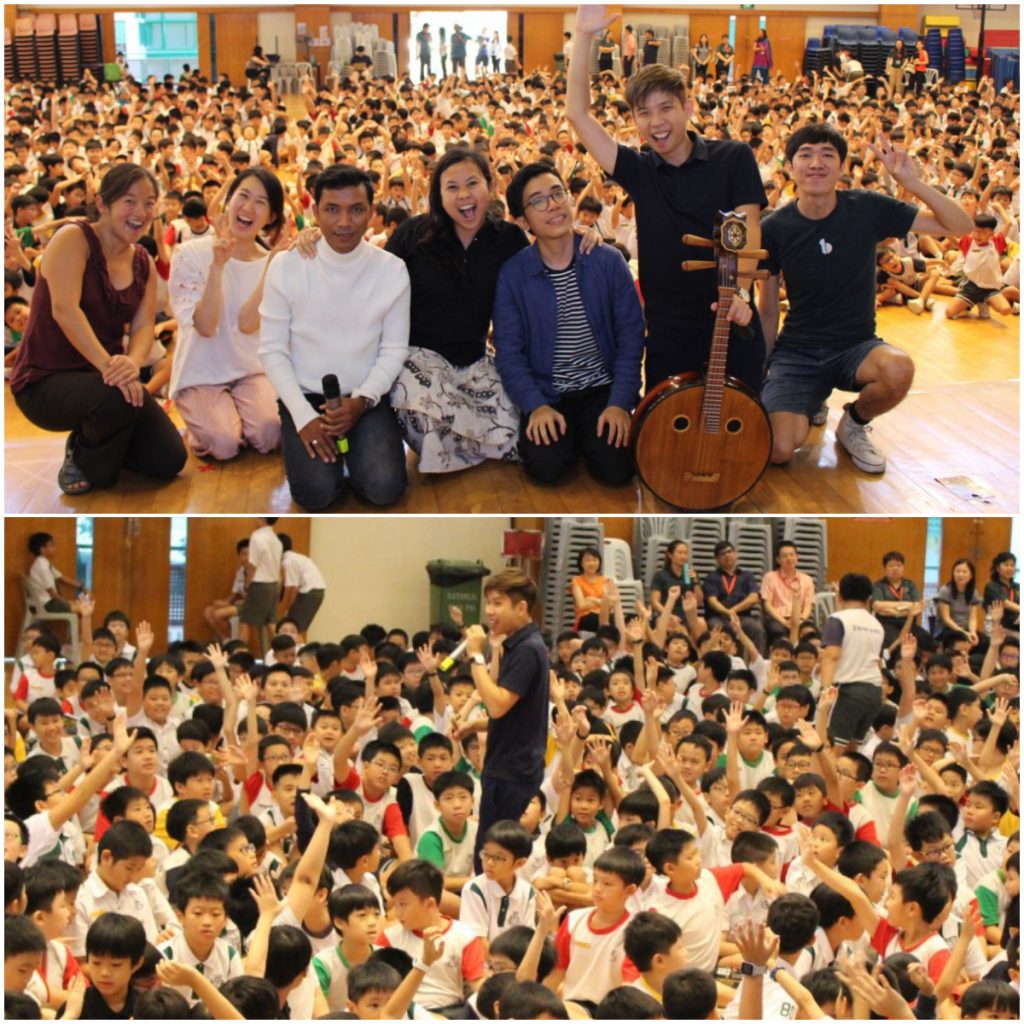 Neil and his team use music to educate younger generations about the importance of accepting and respecting diversity. Here they are at a workshop at Catholic High School

Besides promoting cultural diversity, how else are you using your work to make positive social impact?

I run a CSR programmed entitled "Giving Back", in which I conduct music therapy sessions for patients at Tan Tock Seng Rehabilitation Centre. Besides connecting people across diverse backgrounds, music has therapeutic properties. As such, I've been spending a lot of time visiting patients at the hospital, hoping that music strengthens their will to recover.

You managed to turn your passion into a full-time profession. What advice do you have for those looking to pursue a full-time artistic career?

Be prepared that people around you will question your choice to pursue the arts as a field of study or work. When I started out, some of my peers were concerned that as a musician, there was no clear career path ahead of me, especially since traditional music is a very niche market.  However, I’ve decided that this is exactly what I want to do. Even though it is hard to make a living and I have to practise my craft diligently every day, I’m happy to be contributing to society through the arts, and to be constantly challenging myself to improve. 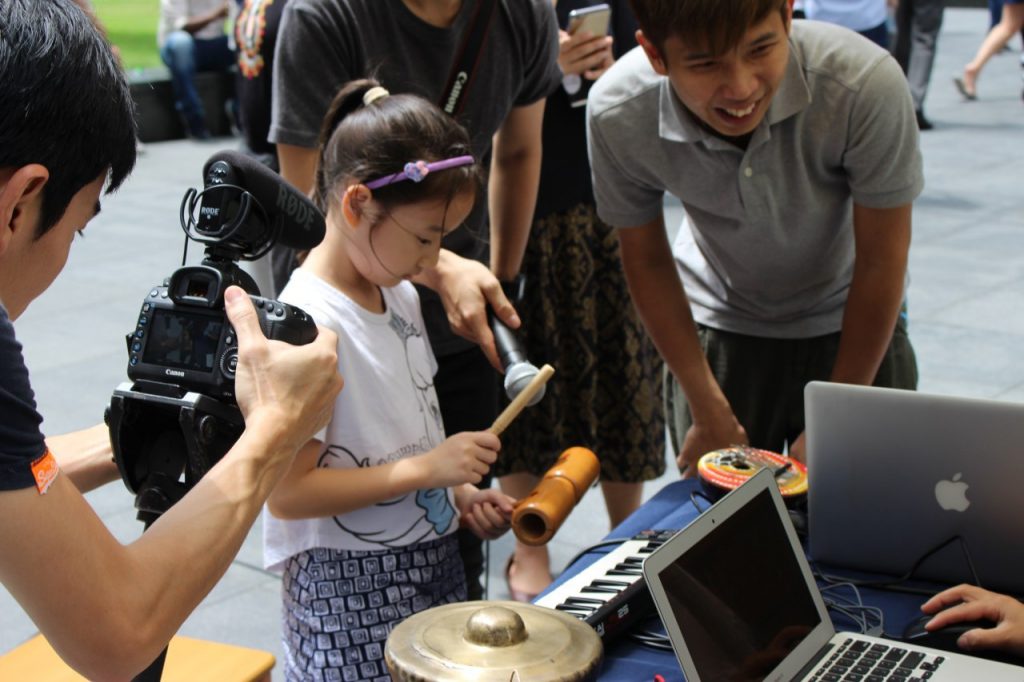 Neil and his team engaging the public with their music through their "Street Studio" programme, held at the Raffles Place Park—people got to express themselves creatively by composing original music on the spot, using instruments, vocals, or other easily available materials such as books and pens

So my advice to anyone looking to follow their passion is to find meaning and purpose in what you do. It’s also important to have the support of family and friends. I’m very fortunate in this regard. When I was in China for my studies, they answered my every phone call, and were always there to encourage me, give me advice or lend a listening ear. My music and my work are the products of their unwavering support.

What are some upcoming performances we can look forward to?

We're producing a recital based on the full family of ruan and I'll be performing onstage with renowned ruan musicians. Also watch out for Dialogue with Ruan (四说阮语) later this year and Night Walker (夜行者) early next year. Visit our website for all the latest updates.