In 2003, I left my freelance journalist job in Dhaka for work in Singapore as a construction supervisor. My wife, Jui, and son, Zarif, stayed behind in Bangladesh. Coming to Singapore, I brought with me my love for poetry, journalism and photography. Outside my work hours, I would read up on Singapore and explore the local literary and poetry scene. In Bangladesh, one can readily find poems published in books and newspapers; however, I could not find a single poem in any of Singapore's newspapers, and this gave me the initial impression that Singaporeans do not like poetry.

A year later, I founded “Amrakajona” (Bengali: “We Are”), a Bengali poetry interest group for like-minded individuals to profess their love and interest in poetry and music. After a tiring six-day work week, members would gather on Sundays to exchange insights and share their latest creative works. And I have found that immersing myself in Bengali poetry in this way helps to alleviate fatigue and homesickness, and makes me feel more connected with my community. 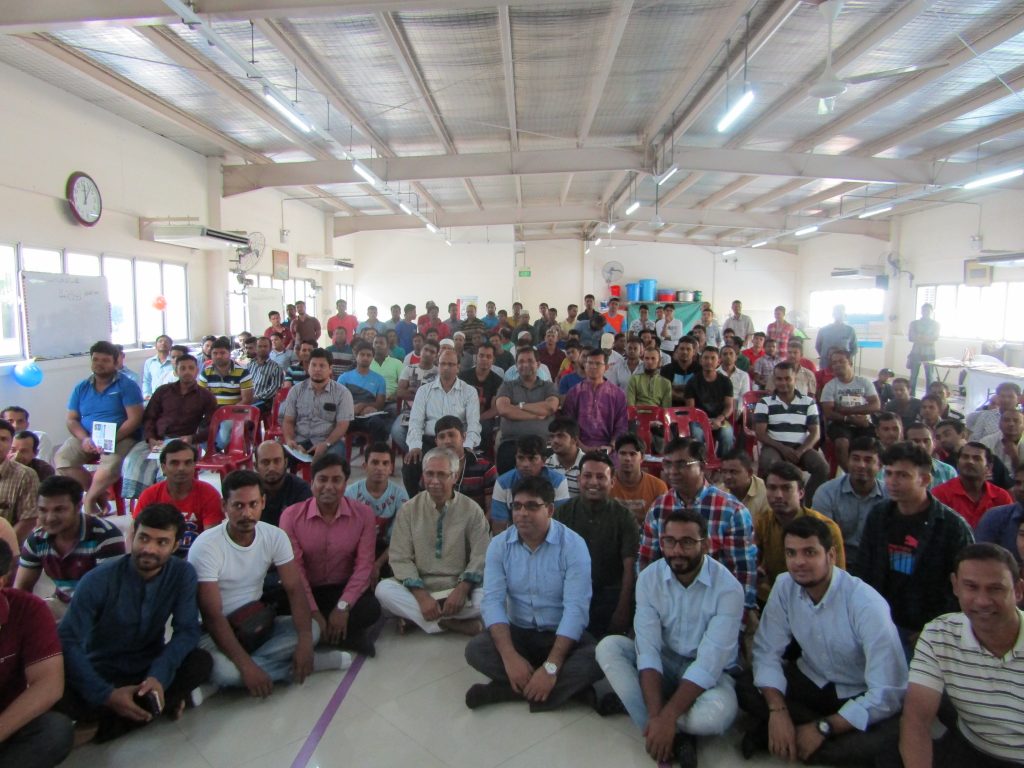 The 2017 book fair was officially opened by the High Commissioner of Bangladesh and held at Jurong Penjuru Dormitory.

Amrakajona’s activities include poetry recitals, plays and music events. Between 2005 and 2010, we held yearly book fairs, featuring titles from Bangladesh and sold at cheap prices. The book fair was not active from 2011 to 2016 due to group members’ busy schedules, but we revived it in 2017 as Singapore Bengla Literature (SBL). We held our seventh book fair at the now defunct CityLink Mall bookstore, Booktique, as well as at Jurong Penjuru Dormitory. Officially opened by High Commissioner of Bangladesh to Singapore Mr Md Mustafizur Rahman, and supported by Booktique and the Singapore Bangladesh Society (SBS), around a thousand people turned up for the fair.

One Bag, One Book

The aim of the annual book fair is to make Bengali books easily available to Bangladeshi migrant workers in Singapore, and thereby spread the joy of reading. More recently, I embarked on a project called “One Bag, One Book” to promote the idea that literature is essential to one’s self development and a source of comfort for people who are away from their homes and families.

Why “One Bag, One Book”? Most people see migrant workers carrying a backpack in the mornings while commuting to their workplace via train, bus or lorry. Their backpacks typically include their essentials for the day, like a water bottle or lunchbox. However, I hope that in time to come, every bag will also contain a book, and I want to encourage every migrant worker to read at least one book a year. That translates to less than five minutes of reading each day, which is a very achievable goal. As these books are written in their native language, reading can connect migrant workers with their home country, as well as be an enjoyable leisure activity to relieve stress. 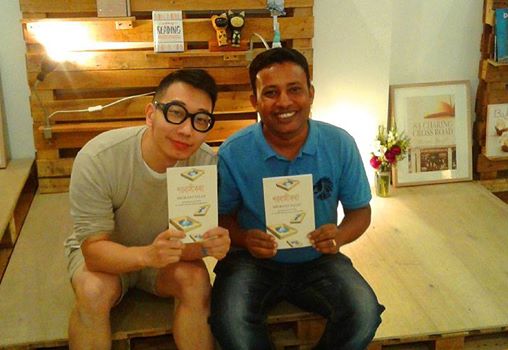 Zakir with Booktique owner, Anthony Koh, who offered his bookstore as an additional venue for the book fair.

Although there are currently around 100,000 Bangladeshi migrant workers in Singapore, “One Bag, One Book” will target 100 people for a start. Physical paperbacks will be distributed to them instead of e-books because I believe that reading from a printed book helps to hone one's concentration. With the yearly book fair revived to support the “One Bag, One Book” initiative, Amrakajona’s members are presently looking for sponsors to support our cause. We have also been gathering feedback from fellow migrant workers and putting together their “wish lists” before sourcing for suitable titles to carry at the fair. There are also plans to start a book exchange club to hand out the leftover books from past book fairs.

Amrakajona regularly holds poetry recital sessions, where all are invited to come and listen to original poems written by the group’s very own Bangladeshi migrant poets. Also during these sessions, a member will deliver a 10-minute speech on his thoughts about poetry, and share his take on specific issues. An open discussion usually follows, in which everyone chimes in with their views on certain points raised during the speech. The purpose of these sharing sessions is to encourage group members to be open and accepting of ideas—a trait that I consider essential for all writers and poets. 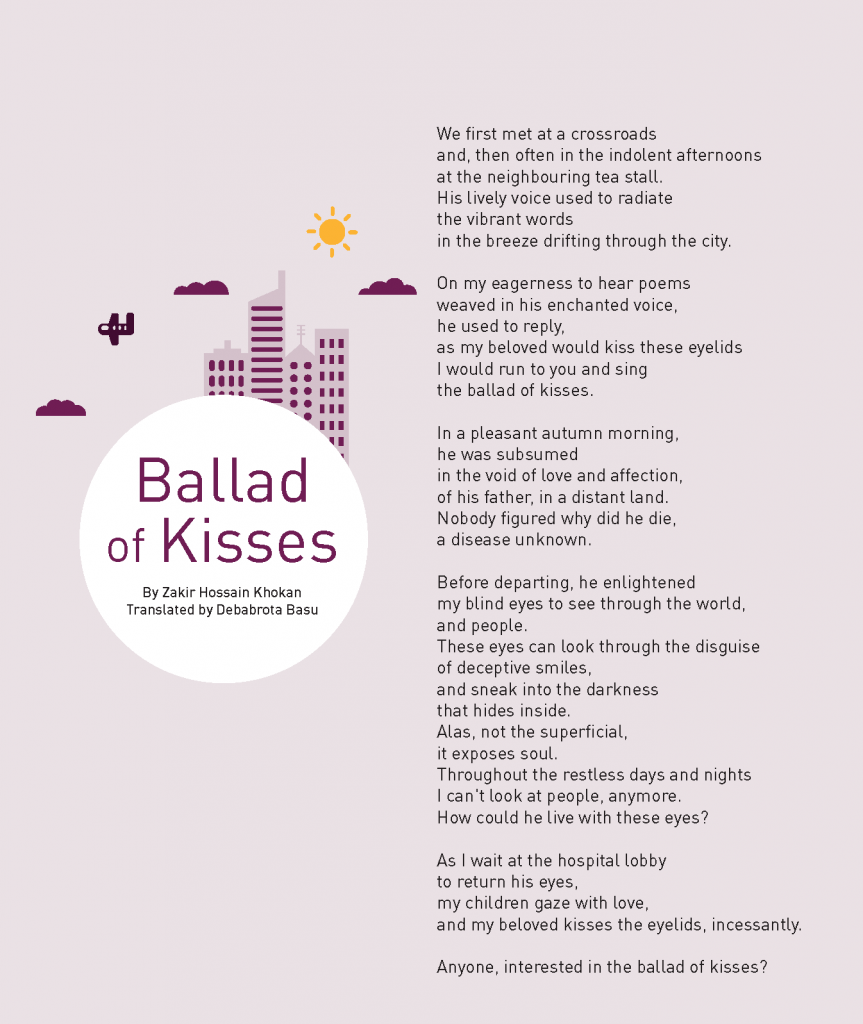 Amrakajona’s members comprise not only poets and literature lovers, but music fans too. In July 2017, we started our own Bengali poetry band, which plays live music alongside poetry recitations. We also welcome Singaporeans to join our band, even if they are unfamiliar with our language, as I believe music transcends cultural and linguistic barriers, and unites diverse groups of people.

In 2014, I submitted three entries to the Singapore-based Migrant Workers Poetry Competition. It was my friend, A.K.M Mohsin, the editor of Banglar Kantha, who encouraged me to take part. I remember our phone conversation: it was a rainy evening after work and I was aboard a bus that was taking me back to my dormitory in Sembawang. After we spoke, I was so inspired that I used the rest of my one-hour bus journey to pen three poems, respectively titled “Pocket One”, “Pocket Two” and “Pocket Three”. “Pocket One” was about me, my son and my country. Pocket Two was about my wife and I. "Pocket Three" was about me, my father and immigrant life. Together, the three poems were about how we missed each other. In November 2014, much to my delight and surprise, “Pocket Two” beat 84 other poems to win the top prize in the Migrant Workers Poetry Competition.1

The contest was covered by several local and Bangladeshi news agencies, and even international news outlets such as the BBC. With all this publicity, Amrakajona’s membership numbers swelled—many existing or aspiring poets who had not heard of the group before reading the news reports flocked to join our sessions, and we have enjoyed steady growth since then.

Since the competition, my works have caught the attention of Singaporeans, many of whom are interested to adapt my poems. In 2015, the local dance company CHOWK held a performance called From Another Land, inspired by my winning works—“Pocket One”, “Pocket Two” and “Pocket Three”—as well as that of Rajib Shil Jibon’s—“Shades of Light and Dark”, the runner-up entry in the Migrant Workers Poetry Competition.2 Staged for two nights at the Esplanade Theatre Studio, the performances enjoyed full-house attendance. My passion for poetry has also enabled me to befriend many Singaporeans, including poets, writers and booksellers. 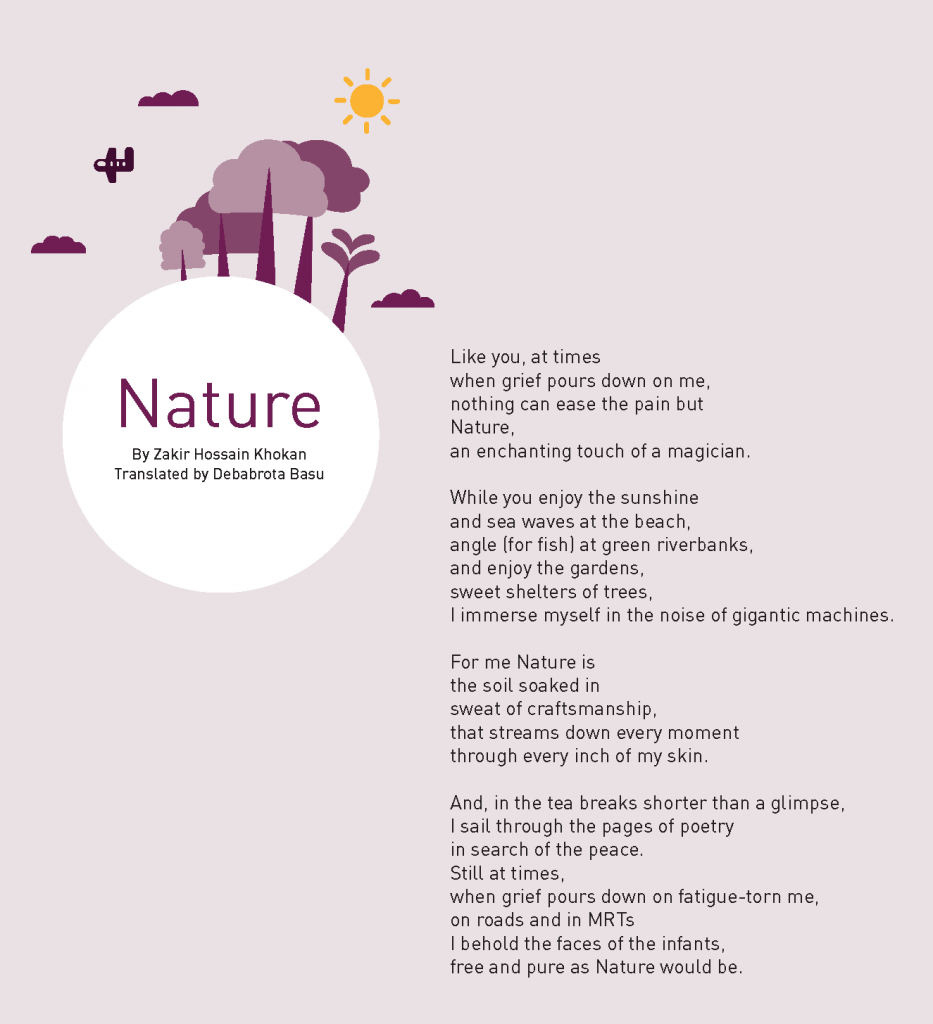 My poems have been recited in English by many well-known local poets, such as Alvin Pang, at poetry recital sessions. When we published our poetry anthology, Migrant Tales—featuring the works of 18 Bengali migrant poets—Pang wrote the Preface, and Assistant Professor Richard Angus Whitehead organised a seminar at the National Institute of Education to discuss the book. Additionally, bookstores such as Booktique, Books Actually and City Book Room, and the art gallery and cafe, Artistry, have been very supportive, hosting our “Poetry Evening with Migrant Tales” sessions during which migrant poets recite their works to an audience of poetry lovers. In May 2017, Anthony Koh, owner of Booktique, provided the venue for Migrant Tales’ official launch and the book fair, hosting the event at his CityLink Mall storefront and even covering the shipment cost of the books!

Going forward, Amrakajona will continue its same activities from 2016, and SBL hopes to contribute more to and become a part of Singapore’s unique literary landscape. We maintain close ties with The Literary Centre (Singapore), Poetry Festival Singapore, Sing Lit Station and with many other local literary organisations. I believe there should be no distinction between “Singaporean” and “migrant” poets, and Amrakajona is a testament to Singapore’s tolerance and acceptance of people from all backgrounds and cultures, with literature as a core propellant.

As American novelist F. Scott Fitzgerald once said, “That is part of the beauty of all literature. You discover that your longings are universal longings, that you’re not lonely and isolated from anyone. You belong.”